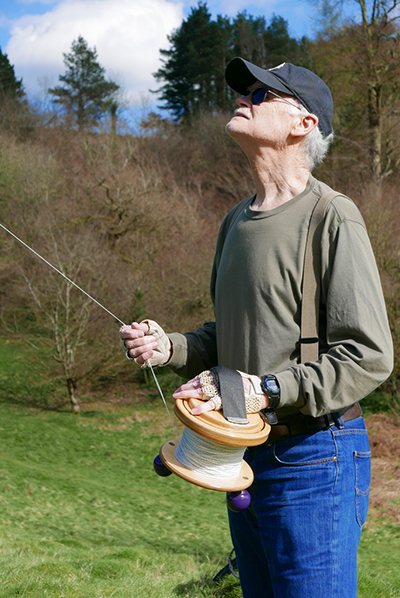 Early 1970s.
Laid off from Convair in San Diego, I went back to my home state of Arizona and found temporary work doing time domain induced polarization and resistivity surveying with Mining Geophysical Surveys. It was hard work but I enjoyed being out of doors. Unfortunately I ended up in traction in a hospital for two weeks with a low back problem (no MRI scans back then). After that I couldn't find work, and accepted the offer to take a trip to Europe with a friend from university. While living on a houseboat in Amsterdam we visited England several times, things happened, and after a while I ended up getting work there. Meanwhile I had met my future wife Bev at a Christmas party in Surrey and everything changed.

We lived near Kensington Gardens in London's Hyde Park. There was a small group of men of all ages there who flew home-made kites with incredibly good performance: big deep sky reels gave quick climbing and high flying, sometimes beyond 3,000 feet. At first I wasn't very interested, but while recuperating from a badly inflamed sprained ankle I received the gift of a new book on kites and kite making, which contained some intriguing new kite designs that really caught my imagination. I started making plastic sleds as well as traditional kites and deltas. Ultimately I found deltas the most interesting.

I bought an old German hand-crank Stouwer sewing machine, unusual in that it had a reverse lever. I made three delta kites based on articles in books and "Kite Tales" magazine, including Bob Ingraham's AKA 10th Anniversary Delta. They were made from shower curtain material found in a local shop. The frames were Ramin hardwood dowels. The material began disintegrationg in the air almpost immediately. There wasn't as yet a kite store in London.

When The Kite Store opened in London, spinnaker nylon became available. Hand cranking the sewing machine left only one hand to feed the fabric through, so I glued, pinned, or stapled the two halves of deltas together along their center-lines and glued leading edge sleeves in order to be able to sew them with precision. I hot-welded the trailing edges together, too (symmetry is all-important). I started experimenting with nose angles and scale, spar lengths, spreader attachments, etc, then altering the plan forms as well by extending the wings aft. I soon realized that my original simple set of lengths and proportions was inadequate for locating the crucial towing points on fins. I did an awful lot of experimenting and test flying, occasionally making a new design over night and flying it at sunrise.

A.K.A member Harold Alexander became my mentor by post, and from him I learned his and John Loy's mathematical equation for calculating towing point positions on deltas and sleds. Len Pradier on Parliament Hill (Hampstead Heath in North London) experimented with plastic deltas with shallow triangular scallops on their trailing edges, and, inspired by those I started experimenting with scallops in the form of arc segments of circles. The Loy/Alexander equation came into its own for these, but needed some extra terms, which I added, and ultimately I could accommodate most any combination of radii and straight lines for trailing edges. The reason for using arcs of circles is they can be drawn precisely and tangentially, if required, by using a sort of compass made from a length of thin but rigid wood with holes drilled for specific radii.

Scaling scalloped delta kites up or down had now become practical. I had been scaling deltas with straight trailing edges up from the very first. That was easy with the hardwood dowels available at the time, and which I could hand-match myself in the yard for large deltas, matching pairs prior to purchase. In the early to mid 1970s Ramin could be had in up to 18 foot lengths in larger diameters for deltas up to 18ft 4in span.

There was no fiberglass or carbon yet for kite makers in Britain. While it lasted, I was a part of the "Kite Workshop" group along with Jilly Pelham, Nick Morse, Andrew Jones and Ray Merry. I learned quite a lot, especially by watching Jilly at work. My main contribution besides a small delta was the 46 inch Roller, because as a Round Pond regular I knew Alec Pearson's 48 inch design by heart. (Each Round Pond flyer made his own version of the Roller.) This Roller became the Vertical Visuals Roller. It is two inches shorter and narrower, because the sail parts had to fit the then standard narrow (~104cm wide) ripstop of the day. It also had the center spine inside a sleeve, so bridles could be attached to loops by the machinist, and the little aft fin could be sewn into the center sleeve rather than being attached by hand with loops of cord afterwards, both jobs that required an extra person. Meanwhile Andrew and Ray were busy perfecting their Flexifoil stunt kite; Nick Morse designed the Kite Workshop Malay, an Eddy kite with the cross spar at 1/7 of the spine rather than the 1/5 of the original. Nick specialized in huge Bell tetrahedrons and man-lifting Cody kites. Jilly made a selection of David Pelham kite designs. Bev was working full-time managing jean boutiques in Oxford Street, Kings Road, and Kensington, but made square kites for the Kite Store for a couple of years.

Then as the 70s ended a young lawyer approached Bev and I and asked us to make kites in bulk for his Wycombe Kite Company in High Wycombe, Berks. We worked out how to cut as many as 56 layers of ripstop (44-46 being normal) in symmetric halves with the proofed sides of the fabric on the same side of the wings. I made the patterns. I cut inside angles with sharp chisels, longer lines with Stanley knives, used tooling marks and holes to align wing halves and locate fins. And began using fiberglass, still hand matched in pairs, for wing spars. One of those Wycombe designs holds a UK endurance record and another is still a favorite, reborn as the Wildcard. Copies of our ram-air sled are still being made by an established British manufacturer.

Experimenting tapered off by the mid 1990s, when I decided I had enough designs and should concentrate on making them. Nevertheless, I began testing carbon tubes around 1990, and had some great years after 1996, when a falconer in Missouri got us started making kites for training falcons, especially birds bred in captivity that had no wild parents to teach them how to hunt. It isn't all in the genes - young birds of prey will be content to live a comfortable life of leisure if left alone. Kite training involves emulating the way adult wild falcons coax their young into the air and gradually work them up to what is known as a high pitch, at least 1,000 feet. At the turn of the millenium I had spinal surgery, which has changed my life for the better.

One by one, beginning some years ago, the carbon and fiberglass tubes we used in most of our kites were dropped from production, mainly thanks to metrification. The carbon tubing I had ear-marked in the mid to late 1990s to replace our favorite 1/4 inch fiberglass (in case the inevitable happened) was unfortunately one of the first to go.

After a couple of years of testing and searching, I very recently found a manufacturer of identical-looking 6.35x3.2mm pultruded GRP tubing, but it turned out to be 16% heavier per unit length. It matched the flex of the originals, too, so it might work in strong breeze lites. Testing, testing, testing...

Meanwhile the family has been growing. Our son and daughter both have two children each and live within walking distance. The eldest grand-daughter became an enthusiastic kite flier at age 6. Bev has been caring for the four grandchildren almost full-time. I help.

Drones have taken over in falconry. I'm glad. I am a bean pole: walk everywhere, don't smoke, cholesterol normal, no plaque, no clots, no coronary heart disease, clear spiral CT scans, but had a heart attack and two stents inserted in October 2017, and have cardio rehab sessions twice a week. Although I designed a new Whirlwind while in the hospital, it was several months before I could make it up the hill to fly, and walking uphill is my main exercise routine on a treadmill once a week. Progress is slow but steady, and is due to continue indefinitely.